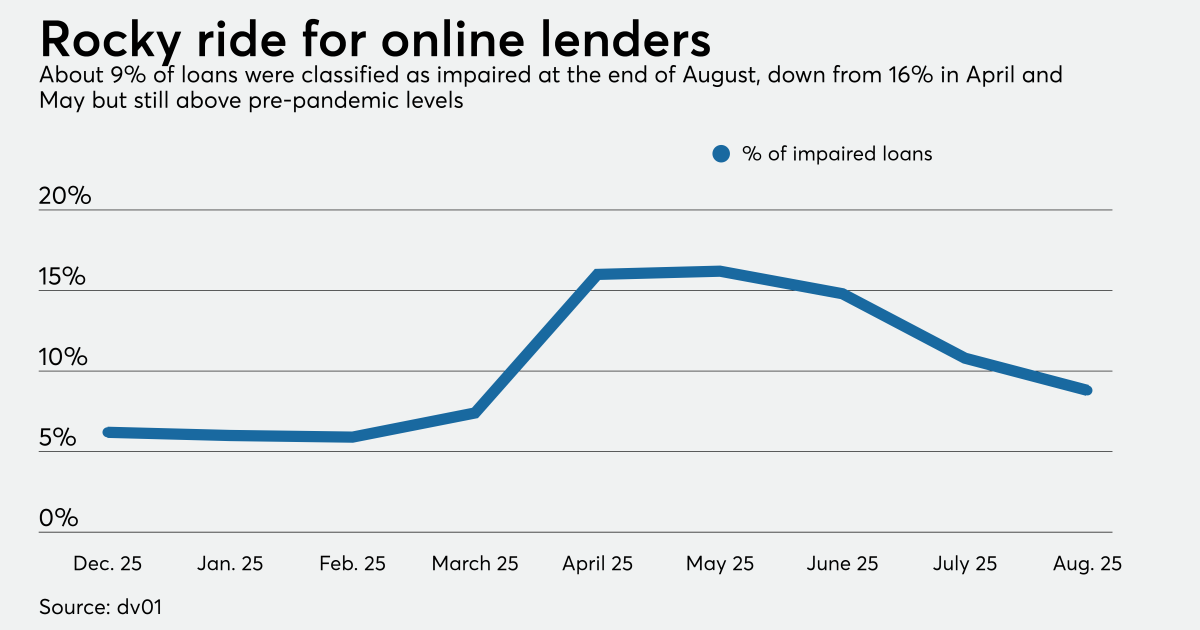 For several years, the online lending industry has faced doubts about its ability to withstand a period of high unemployment. But during the pandemic-induced downturn, credit quality held up better than expected.

The latest evidence: Data showing that the percentage of borrowers who made their regularly scheduled loan payments continued to rise in August, even after the expiration of expanded unemployment benefits from the federal government.

â€œUnemployment benefits have gone down and there has been no significant drop in loan performance,â€ said Vadim Verkhoglyad, analyst at data firm dv01, which last week released a performance report of more than 2.3 million loans from in the US online lending industry.

Before the COVID-19 crisis, around 5% to 6% of borrowers with online loans typically did not make their regular payments, with or without the lender’s blessing, according to the report. This percentage reached 16.5% in early May, as many borrowers requested forbearance. Last month it was down to 8.9%.

Credit performance in the online lending industry could deteriorate further, particularly if high unemployment persists and Congress fails to reach an agreement to renew the government’s stimulus payments.

But so far, American consumers are acting differently than expected and deleveraging rather than borrowing to support consumption, said Todd Baker, senior researcher at Columbia University’s Richman Center for Business, Law and Public Policy. Data to date suggests a better outcome than the worst-case scenarios, he added.

During the rapidly growing years of the online lending industry, some observers were skeptical of its ability to weather a downturn, as online installment loans do not offer continued utility to borrowers, who receive the loan proceeds. in advance.

This contrasts with credit cards, which continue to be useful as a spending tool as long as borrowers make their minimum monthly payments. Historically, the performance of credit in the card industry has been closely linked to the unemployment rate.

But during the pandemic, consumer spending fell dramatically, which has likely helped many borrowers continue to pay off their loans online. Since April, the personal savings rate in the United States has been above 15%, the first time since the 1970s.

Verkhoglyad suggested that fear drove American households to be more frugal, which led many to repay existing debt. The dv01 report shows that the percentage of online loan balances that are prepaid has increased since before the pandemic. Borrowers typically take out these installment loans to refinance existing credit card debt at a lower interest rate.

There are also reasons to wonder if misconceptions about the performance of online consumer loans maybe got it wrong from the start. TransUnion found in a 2017 study that when faced with choosing what debt to pay, financially distressed consumers tend to prioritize unsecured personal loans over auto loans, mortgages and credit cards. . The company attributed the unexpected consumer priorities to the relatively short duration of personal loans.

â€œIt’s not 2008,â€ said Anuj Nayar, chief financial officer at LendingClub. He noted that American consumers have entered the current recession with stronger balance sheets than they did at the start of the last crisis. After peaking at 12% in May, the percentage of LendingClub loans on hardship plans fell to less than 5% at the end of July.

â€œThe weather is sort of on par or better than our expectations,â€ said Nayar.

Yet the surprising resilience of the online lending industry since March has not been enough to convince some investors who previously provided finance to return. LendingClub, like other online lending platforms, connects potential borrowers with individual savers or institutional investors who fund the loans.

The San Francisco-based company reported $ 325 million in second-quarter loan origination, down 90% from the same period a year earlier. Nayar said that even though investors have started to return to the company’s platform, LendingClub will not hit its pre-pandemic pace for loan origination in 2020.

In the online lending industry, loan issuance rose 21% between June and July, but was still down 56% from the same period a year earlier, according to the dv01 report.

2020-09-08
Previous Post: Pasig’s TAPAT cash loans to be released Friday – Mayor Vico – Manila Bulletin
Next Post: Loans for bad credit: What types of loans can I get if I have bad credit | Personal finance | Finance